CANOLA OIL is the market name for RAPESEED OIL,  which as might be assumed from the name, is expressed from rape seeds. For the obvious reasons, the name was changed to canola by the Canadian seed-oil industry. The rape seed actually is the seed of  BROCCOLI RAAB.  Canola oil is rapidly becoming  the most popular oil used in the USA and Canada. In Canada it is referred to as lear oil for “low erucic acid rapeseed” oil.The popularity of canola is rising fast, probably because it’s been discovered to be lower in saturated fat (about 6%) than any other oil. This compares to the saturated fat content of peanut oil (about 18%) and palm oil (at and incredibly high 79%). Another canola selling point is that canola oil contains more cholesterol-balancing monounsaturated fat than any oil except olive oil. It also has the distinction of containing Omega-3 fatty acids. The wonder polyunsaturated fat reputed to not only lower both cholesterol and triglycerides, but to contribute to brain growth and development as well. The relatively bland taste of canola  oil makes it a perfect choice from frying of salads.

Courtesy of Barron’s and the Food Lovers Companion 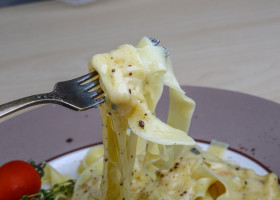